Women’s networking groups and events often get a bad rap. I read a thread on LinkedIn recently querying the worthiness of women only networking events. Some of the ensuing comments were disparaging, small-minded and in some cases, downright mean. What was more disappointing was that the author had never even been to a women only networking event. What a shame she has formed an opinion based on incomplete information. 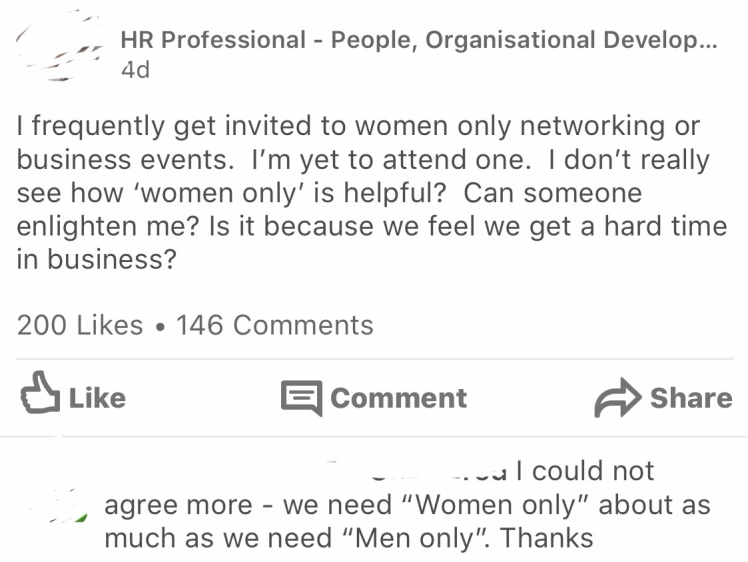 Yep, It Struck a Nerve!

This post struck a nerve for me. Why? Because of timing. I’ve just hosted my 11th women only event in 2 years. My social enterprise, “Women Who Get It” is my way of providing safe, friendly, welcoming spaces for women to learn, connect and advance, with each other.

My WWGI group is also my way to honour women in business (because it’s tough!), help to stimulate the female economy (women doing business with women) and helping women to achieve success, however they define success. Pretty much everything that was the opposite of this post!

What makes my beloved WWGI so successful?

Ahhhh, but self praise is no praise at all! Here are some unedited and verbatim comments from the women who “get it” who have been to an event and are members of our community:

“I came to your event, not knowing what to expect and I was so pleasantly surprised, I was surrounded not only by strong women, but women who weren’t threatened by one another, supportive, kind women. ”

“The team was all really positive, and rated it the best networking event they have ever been to.  I think the structure was excellent….. ”

“Best thing I have been a part of. Ever!”

“Had a great night and look forward to networking with many of the women I made connections with.”

“Best event! Thanks so much for creating a safe space for women who get it!!”

There is a plethora of research about the benefits of female networking groups. I won’t regale you with all of it, but here are some facts (not conjecture):

We are an ecosystem of powerful women

In short, women’s networks, including my own WWGI, are an ecosystem of unique, wonderful women who are learning, connecting and advancing, together.

There are 3000+ women in WWGI who hang out together, online and in person, have great discussions, come to great gatherings and we’re growing in numbers every single week.  I reckon that is enough evidence that I (and other women’s networks) are meeting an unmet need for women, from all walks of life.

So my response to the detractors of women’s networking groups is to  give it a go, before you criticise.  You just never know who you might meet and gain wisdom from.

Individuals can apply to join The Femeconomy Network.

Photo by rawpixel on Unsplash