As I became older, like many people, I moved my involvement in sport back to the sideline. But as the opportunity arose, I became a contributor as well as an avid fan and spectator. I coached, managed, scored, was an umpire, escorted umpires and eventually, I chose to become an administrator. First in netball then in AFL football. My roles on committees and boards in netball and footy have enabled me to combine my areas of strength and passion, being leadership, business administration, governance and sport. It also meant that I came face to face with an issue that surprisingly, I hadn’t been overtly conscious of.  The sheer lack of women in leadership in the sporting sector. It was a mens game, quite literally. What in the world is going on?

From Awareness to Action

This abrupt awareness of the paucity of women in leadership in sport led me to take action. In 2017, I set out to better understand exactly what was happening for women who worked in the sporting sector in Australia.  That is when the Advancing Women in Sport research series was born.

I was genuinely curious to understand if my own observations (and bewilderment) about sport and the data I had gathered meant that there really was a problem with gender inequity in sport. When disappointingly, that theory was proved, I decided to deepen my knowledge about the matters that drive and perpetuate the exclusion of women in and out of the sporting arena.

But I wanted to do something different. I didn’t want to develop another body of statistics, data and anecdotes about the woeful under-representation of women in sport. Instead, I wanted to create a playbook, based on research and evidence, about how all of us in the sports industry can drive meaningful change for women.

The Statistics Speak For Themselves

Whilst I didn’t want to build another body of data about the status of women in sport, we know that facts, data and evidence starts useful conversations. Data is also a useful way to create the aha moment that I seek in leaders who want to understand how to shift the performance of their organisation through greater diversity and inclusion.

The statistics about the status of women in sport speak for themselves. Women are under-represented at senior levels in sport. Women are over-represented in entry-level and mid-level roles. In other words, sport is run and governed largely by men. So where are the men in the conversation and the action to address systemic gender inequality in sports leadership? 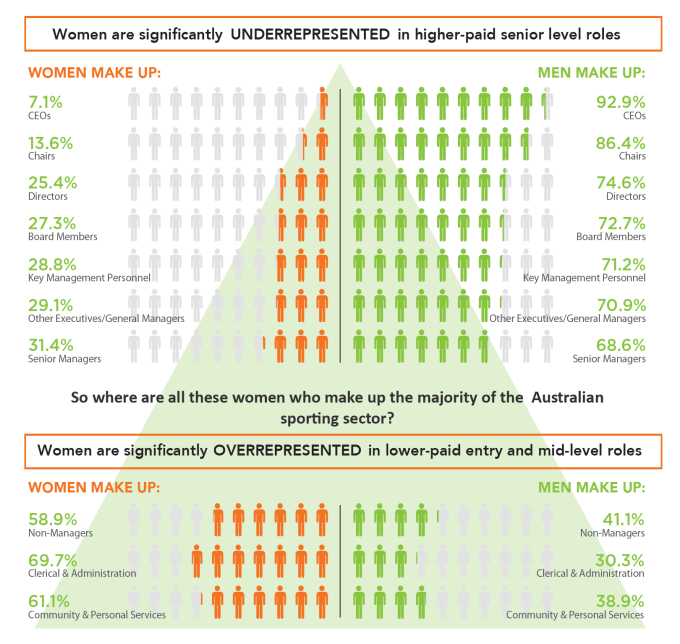 There are many people who are committed to advancing more women in sport. So why aren’t we seeing faster change in sport? I’ve observed some illuminating and frustrating factors that I believe perpetuate the issue of  gender inequality in sport. Illuminating because there is a glimpse into what we can all do to level the playing field for women in sport, on and off the field. Frustrating, because these barriers to success could, with collective effort, be overcome.

The collective effort to address gender inequality in sport must include men. Because, for fear of stating the bleeding obvious, men dominate the most powerful roles in sport. Yet men are not yet actively engaged or engaging in discussions or taking action on, gender inequality. Men are not proactively seeking out ways to  level the playing field for women in sport.

Facts about men in sport that my latest research discovered:

Now, you don’t have to be a mathematician to realise that there are a substantial percentage of men who are not yet convinced or indeed, may be against gender equality in sport. But you would also note that there are weirdly contradictory numbers in that data set, ie: 86.9% of men know they have a role to play in creating gender equality. Perplexing, but also consistent with what we already know about the complex and contradictory views that Australia has about women, work and leadership.

Perhaps male disengagement from the debate and action about gender inequality is caused by and causing differences in, the ways that men perceive gender inequality to women? Put simply, if you ask a man about gender inequality and then ask a woman, you are highly likely to receive inconsistent responses about  what constitutes gender (in)equality. Perhaps these differences, and how the differences and debate is managed, is what is perpetuating men’s disengagement from the issue? Perhaps men are fearful of treading into territory that they see as the domain of women? Perhaps men are simply disinterested? Perhaps men do not want to relinquish the unearned privilege and power that society has awarded them with?

Getting Men on Board

I am curious, and committed, to understand how we might better engage men, particularly those that hold the most powerful roles in sport, business, politics and in society, in this conversation. I welcome conversations and forums that engage men in conversation that enables them to get involved. I welcome suggestions on how to create those forums and environments where men can learn and then take action.

I do want to know what in the world is going on for men in sport. Because achieving gender equality in sport will create a more prosperous, sustainable and enjoyable sporting arena for all of us. 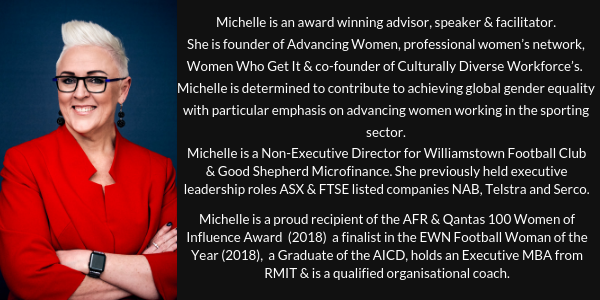 Photo by Steven Lelham on Unsplash